During the project, participants were able to learn about World War One through attending learning sessions and undertaking research. Some young people worked together to produce a ‘picture board’ of their findings, which demonstrated their increased awareness of the War and the role of sport. There was also an increase in awareness amongst other participants attending the learning sessions and one respondent commented…….

“My knowledge of World War One was very limited to knowing when it took place and that a lot of people from around the world were involved. I knew very little about the role of sport during the war and this project has made me more aware, especially about the Christmas Day football match and the number of high level sports stars who went to war.” 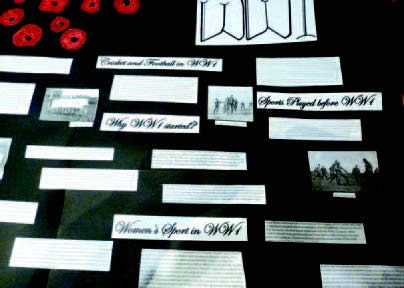 Picture board produced by young people.