A total of 55 people completed the questionnaire and the following results emerged: 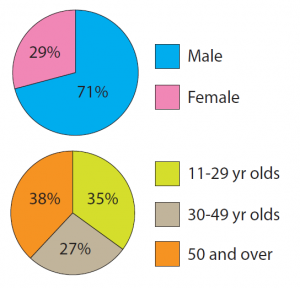 Q1. Between what years did World War One take place?
A large proportion of respondents (84%) correctly stated that the war took place between 1914-1918.

Q3. Which month did Britain enter World War One?
(47%) of respondents were correct in stating that August was the month when World War One started.

Q5. Which date and month did World War One come to an end?
Bearing in mind that the end of World War One is commemorated each year, it is a little surprising that only (44%) of respondents could answer the correct date.

Q6. What sport was played during the Christmas Day truce?
A high number of respondents (84%) stated the sport played was football.

Q7. What event took place at Preston North End Football club on one of the Christmas days during World War One?
Only (15%) of respondents correctly stated that Dick, Kerr Ladies football team played their first competitive football match at the club.

Q8. Which major international sporting event was cancelled due to World War One?
Most respondents (42%) correctly stated that the Olympic Games was cancelled followed by (33%) stating that it was the Football World Cup.

Q9. Which famous writer was heavily involved in recruiting sports people to join the army?
Surprisingly, the highest response (29%) was for the correct answer of Arthur Conan Doyle. Perhaps even more surprising was that (18%) of respondents thought the answer was William Shakespeare!

Q10. Which of the following sports performers did not take part in World War One?
The most popular and correct response (47%) was for Tom Finney.

Overall, the responses showed that there was limited knowledge of certain aspects of the First World War and that the learning sessions were designed to help increase awareness.