On the outbreak of the First World War some of Britain’s leading sportsmen joined the British Army. This included Tony Wilding, the Wimbledon singles champion four years running (1910, 1911, 1912, 1913). He also won the doubles final four times. In June, 1914, Wilding lost the men’s singles final to Norman Brookes. On the outbreak of the war Wilding joined the Royal Naval Air Service.

Walter Tull was born on 28th April 1888 and grew up to play football. At the end of the 1908-1909 season he was invited to join Tottenham Hotspur, one of the most important clubs in the country.

Walter Tull was only the second black person to play professional football in Britain. The first was Arthur Wharton, who signed for Preston North End in 1886. At the time Wharton held the world record for the 100 yards.

Walter Tull abandoned his career and offered his services to the British Army. Tull joined the Football Battalion of the Middlesex Regiment. The Army soon recognised Tull’s leadership qualities and he was promoted to the rank of sergeant. In July 1916, Tull took part in the major Somme offensive. Tull survived this experience but in December 1916 he developed trench fever and was sent home to England to recover. When he recovered from his illness, Tull received his commission in May, 1917 and Lieutenant Tull was sent to the Italian front. This was an historic occasion because Tull was the first ever black officer in the British Army. He led his men at the Battle of Piave.

Walter Tull stayed in Italy until 1918 when he was transferred to France to take part in the attempt to break through the German lines on the Western Front. On 25th March, 1918, 2nd Lieutenant Tull was ordered to lead his men on an attack on the German trenches at Favreuil. Soon after entering No Man’s Land Tull was hit by a bullet and died. Tull’s body was never found. On 17th April 1918, Lieutenant Pickard wrote to Walter’s brother Edward and said he had been recommended for the Military Cross. 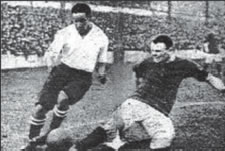 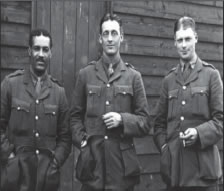 Walter Tull with other officers in 1917. 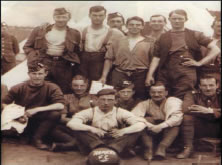 Members of the Hearts football team in France in 1916.